A new documentary by acclaimed filmmaker Adam Curtis (Bitter Lake, The Century of the Self) will become available on iPlayer this October.

HyperNormalisation will explore the time of uncertainty we currently live in, where even those in power don’t know what to do.

The documentary is inspired by the unpredictable events of recent times – from the rise of Donald Trump to Brexit, the war in Syria, the endless migrant crisis, and random bomb attacks.

It seeks to explain both why these chaotic events are happening, and why we and our leaders can’t understand them.

Curtis’s theory is that Westerners - politicians, journalists, experts and members of the public alike - have retreated into a simplified, and often completely fake version of the world. But because it is all-encompassing, we accept it as normal.

HyperNormalisation explores this hollow world by looking back at 40 years of events, and profiling a diverse cast of characters such as: the Assad dynasty, Donald Trump, Henry Kissinger, Patti Smith, the early performance artists in New York, President Putin, intelligent machines, Japanese gangsters and suicide bombers.

The documentary states that those in power - politicians, financiers and technological utopians - led the creation of this alternate reality.

Rather than tackle the real complexities of the world, they retreated. They worked to construct a simpler version of the world - one which helped them onto their power.

But, Curtis argues, the strange world wasn’t only built by the powerful. The rest of us went along with it because the simplicity was reassuring.

This claim is also levelled at the political left and the radicals, offering an explanation of why they are “ineffective at bringing about real change.”

Victoria Jaye, Head of TV Content at BBC iPlayer said: “Adam is a brilliant storyteller and film maker, who has taken full creative advantage of BBC iPlayer to produce ambitious, groundbreaking new work. HyperNormalisation is both timely and important.”

HyperNormalisation will premiere at 9pm on Sunday 16 October.
Posted by bong heights at 14:15 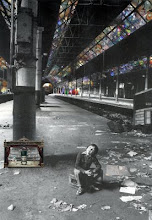